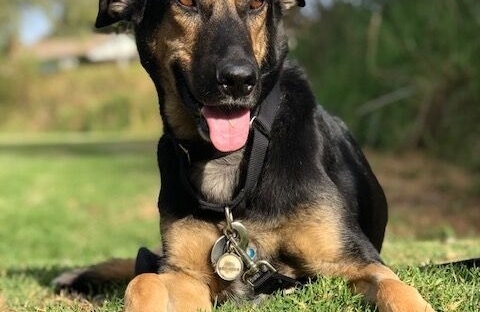 On October 31st, 2018 I came home to find Dastan dragging his back legs and unable to stand. He had lost all use of his back legs suddenly and appeared to have hind-end paralysis. Dastan had always been a special dog. When I adopted him from Iran in 2015, his rescuers told me that as a puppy, they had found him without use of his back legs but that he had learned to “bunny hop”, using his back legs together as one unit. They assumed that he had sustained a spinal injury, but over time had healed and adapted. Even with his bunny hop, he was the fastest dog I’ve ever seen and could easily out run my athletic german shepherd and all of the other dogs at the park. It was as if he had turned his “disability” into an advantage! So when I came home from work in October to find him partially paralyzed, I was shocked and devastated.

I immediately called my vet who told me to rush him to the ER for imaging. From our local ER, we were told we needed to get him a MRI as soon as possible to see what was going on. The closest MRI for animals was in Los Angeles, about a 1.5 hour drive from our home in Santa Barbara. I drove Dastan there in the middle of the night, singing to him the whole way to calm him down. I was terrified of the unknown, there is nothing worse than not knowing what’s wrong and feeling helpless. Once we got to Access Animal Hospital, Dastan was immediately placed under the care of Veterinary Neurologist, Dr. Malte Schwartz (who was absolutely incredible) They performed an MRI which showed inflammation of his spinal cord. There were no structural issues, and no signs of prior spinal trauma. His laboratory work came back inconclusive as well. He was put on a high dose of prednisone, bed rest, and constant monitoring.

What happened to Dastan is still a mystery. What is most likely is that he either had a meningitis type autoimmune response that attacked his nervous system called GME, which is impossible to diagnose without an autopsy and has an extremely low survival rate OR he sustained a spinal cord stroke. The next few months were hard. He got much much worse before he got better. He lost 15 lbs (1/3 of his body weight), his leg swelled and got infected from his immune system being so depleted from the prednisone. We honestly didn’t know if he was going to survive, much less walk again. It was beyond difficult to see him in the state he was in. My once strong, feisty dog was now weak, in pain, and constant discomfort. The medical bills were well over $10,000 and many people would have euthanized. Luckily we have pet insurance through @healthypaws which allowed us to make decisions for Dastan’s life instead of seeing euthanasia as our only option, but even so I can see how many people would view euthanasia as the most compassionate choice. But I could see in Dastan’s eyes that he wanted to live. He’s always been a fighter, and I knew he wasn’t ready to give up.

I did everything in my power to keep his spirits up and give him the best fighting chance I could. I refused to make him stay inside on his bed all day. I knew he loved walks and being outside and with our family. I bought him a wagon so that he could still go on “walks” with us. We went to the park and laid in the grass under the sun every day, even though he couldn’t play like he used to. We spent so much precious time together, and the moments became even more meaningful because I didn’t know how many of them we had left. I researched GME and natural remedies that I could implement to help his body fight. I fed him a human grad anti inflammatory diet, put him on supplements to help his body wean off the prednisone, and did passive movement exercises with him every day to help keep the little muscle he had left. I refused to give up, because he refused to give up.

It was grueling at times. I was picking him up and bringing him outside every time he had to go potty (which was even more often because of the prednisone). I was cleaning and wrapping his infected leg wound 2x a day. He had multiple vet appointments a week, some all the way in LA. I was making all of his food from scratch for every meal. It was a lot. It was physically and emotionally draining, but I would do it all over again for that dog, for any dog. Dogs love us unconditionally and would do anything for their humans. They deserve us to fight for them. And, in Dastan’s case, the fighting worked! The day he stood on his own was a day of celebration for our whole family, and shortly later he took his first “hops” again. We knew he was going to keep fighting until he got back to his normal.

It was still a long road of recovery ahead. We started him in canine physical therapy at @atlasrehabilitation where he began strengthening his atrophied muscles again. He went 2x/week for about 4 months, and now is maintaining about 1x/week. He does all sorts of fun exercises and even gets to walk in the hydrotherapy tank! For a dog who hated the water, he’s been very brave and now even enjoys it. One of the most amazing things to watch through this whole process is how Dastan could tell that the vets and therapists were there to help him. He usually has extreme separation anxiety and trust issues specifically with men, but he could feel the energy from all of all of the people who helped him along his road to recovery, and learned to trust them.

I am happy to report that after 6 months, Dastan is back to himself. He has gained all of his weight and muscle back along with his feisty attitude and spunk. His coat is glowing and I feel like he’s healthier than he’s ever been. I’ve switched both of my dogs over to a home-made human grade diet. They’re loving it and looking and feeling great! Dastan not only survived, but learned to walk and even run again. I’m so happy I didn’t give up on him!

I am sharing Dastan’s story for a few important reasons. Firstly, because I want to encourage pet owners to not give up on their animals, even when the prognosis is unknown or poor. Dastan is a living example that if your pet wants to fight, we owe it to them to fight alongside them. I understand that it can be a huge financial burden, which is another reason I’m sharing this. It would have been much more difficult for us to invest so much in Dastan’s survival and recovery if we could’t afford it. I HIGHLY recommend investing in health insurance for your pets. We have a Care Credit card that we use for medical emergencies only – you don’t have to pay any interest if you pay it off in 12 months. Most pet insurance companies reimburse you after your claim is approved, so what we do is pay for emergencies like this one with the Care card, and then submit our claim to @healthypaws and they reimburse 90% of the cost of the emergency vet bill. They have also reimbursed us for 90% of Dastan’s physical therapy. @healthypaws has been great for us, but there are other pet insurance companies that are great too. All together, it’s been about $12,000 that we’ve spent on Dastan’s vet bills, meds, and physical therapy but we’ve only paid about $1,200 out of pocket. Having this option could literally save your pet’s life.

If Dastan never walked again, we would have done everything to make his life happy and comfortable. We are so grateful that he miraculously healed from this mysterious incident and know that it’s not always the outcome. Our pets don’t have voices, so we have speak for them. I think there are times where euthanasia is absolutely the most compassionate thing to do, but if you look into your pet’s eyes and see that they want to fight, please know that miracles DO happen. Your pet could be one of the 10% that survives their condition. It’s your responsibility as their care taker to give them the chance to fight.

Published by One Planet Rescue

View all posts by One Planet Rescue